Beginnings of the question... “ A drawing with a pencil is an expression of your soul.
A seismograph of your soul.
You put a line down –it’s a feeling and emotion.’
Glen Keane

WHAT THIS RESEARCH IS ADDRESSING?
•
Site-specific live interactive immersive performances that integrate with animation to engage the audience in story
•
The challenges to creators and storytellers on how to utilize the 360otechnologies toward narrative storytelling that engage the audience in the ‘suspension of disbelief’
•
Maintain the diversity of visual aesthetic offered in the traditional animation techniques into the new technology settings 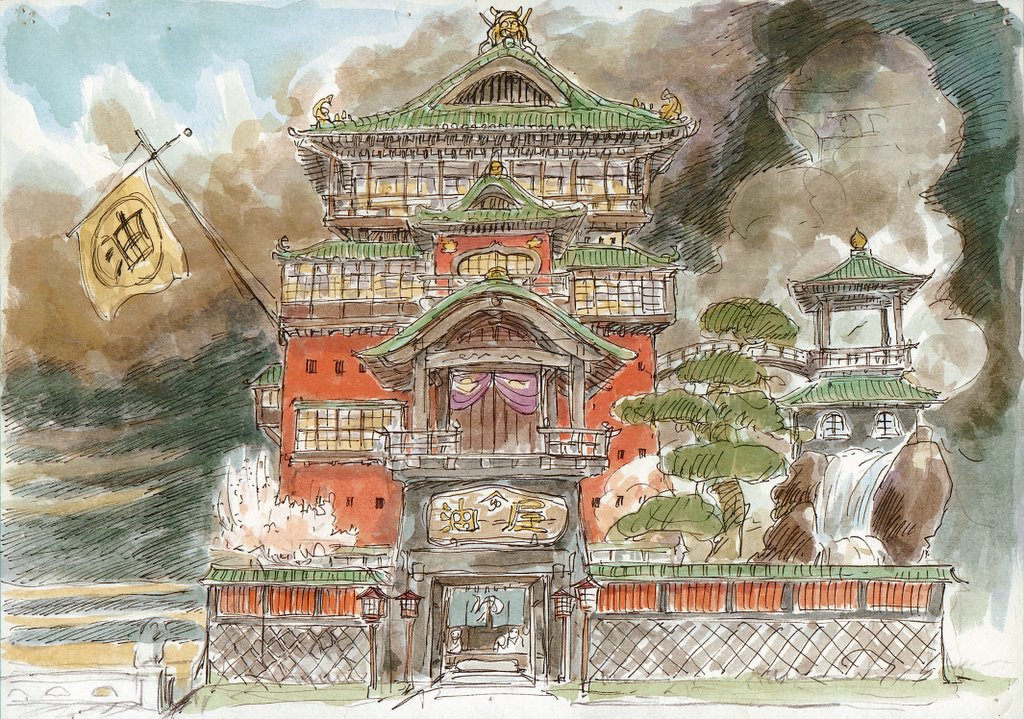 ‘Creating animation means creating a fictional world. That world soothes the spirit of those who are disheartened and exhausted from dealing with the sharp edges of reality’

•
The new technology in animation is being pushed to new extremes in gaming, virtual and augmented reality. The screens are no longer limited to a fixed screen rectangle but can cover buildings, be 360o full dome or encased in a goggled virtual world.
•
The technology prioritizes the visual aesthetic toward hyper realism or absolute abstractionand much of the content relies on the sensational‘wow’ factor at a loss to storytelling and visual diversity.
•
The audience’s experience and interactivity is no longer as the ‘passive observer’ receiving the story as dictated by the director. They can pick and choose where, what and when they view and even interact with participating‘in’ the narrative experience.
•
It is geared to the individual’s experience not the collective audience making it limited access and not shared experience

BEGINNINGS OF A QUESTION


or Can the new 360o technologies be harnessed to combine with traditional animation techniques to create site-specific live interactive immersive performances that engage the audience, tell narratives and maintain the ‘suspension of disbelief’?

Through an Investigation of theory and performance analysis, experiments and practical process I aim to determine the variable and constants needed:

‘THE SUSPENSION OF DISBELIEF’
•
Immersion Deep mental involvement
•
Interactive mutually or reciprocally active
•
Narrative the representation in art of an event or story
•
Aesthetic in particular when concerned with illusion and immersion
•
Performance the manner of reacting to stimuli a public presentation or exhibition
•
Illusion a misleading image presented to the vision; something that deceives or misleads intellectually
•
Animation To Breathe Life into….(something) especiallly when expressed as the perceived illusion of movement

The research will be investigated through a series of experiments exploring the constants and variables: 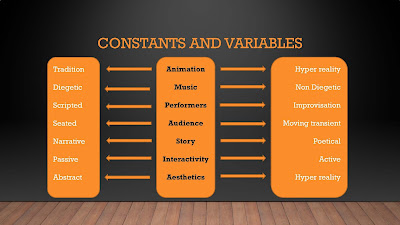 Inspired by Pirates of the Carabina flying trapeze circus performances: 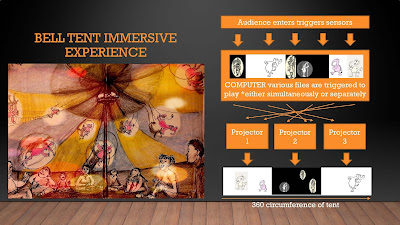 ‘…immersive quality is achieved primarily through sequential drawings on single sheets of paper. You are always aware that the visuals are drawings –some beautifully rendered with detail and fully animated,[…], some drawings are wild scribbles, lines that coalesce into, and out of recognizable shapes’
John Canemakeron Glen Keane’s film Dear Basketball 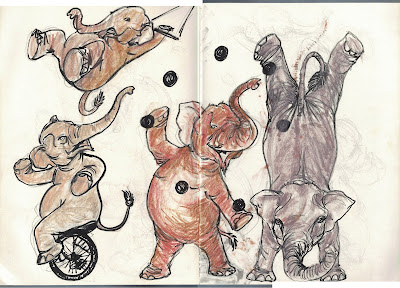 The ideas started as an elephant...

Went through an evolution exploring styles of other animators 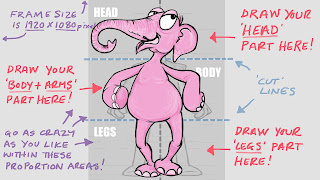 Working in a template from The Animator's sketchclub 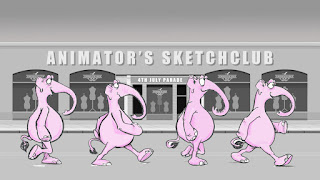 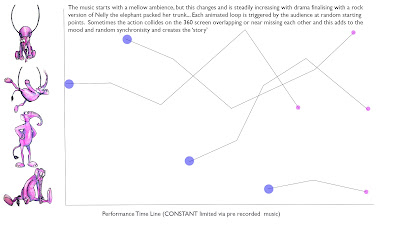 IDEAS AROUND THE  TIME SETTIGS FOR THE PERFORMANCES