Dealing with the depressing and the personal

Animation as a genre is usually associated with humour, childishness or the bizarre fantasy. It can also have the capacity to deal with difficult and dark subject matters. In the Character Design 1 class last week, in an effort to broaden their ideas on what makes a good character I screened two films whose characters deal with difficult to address subject matter. Death, illness and Old Age. 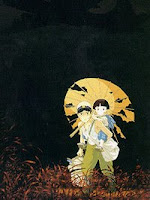 In Grave of the Fireflies (火垂るの墓 Hotaru no Haka) is a 1988
animated film written and directed by Isao Takah. A profoundly human story, in the words of Isao 'a very simple story where the two main
characters die.'
It is the tale of the relationship between two orphaned children, pre-teen Seita (清太) and his young sister Setsuko (節子). It is in terms of commercial cinema expectations a very difficult idea to sell: a cartoon about children dying.
However, despite his initial reservations about the project, which had a release date already set which limited the creative ideas he would like to have adopted for the film, Isao developed the animation and it's characters with deep sensitivity. He concentrated on bringing out the details of the characters mannerisms and environment. Their world, their lives in detail and by adding into the narrative from his own experience of living as a
child after the War. 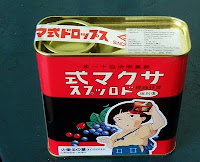 He gives the Setsuko a prop of the Sakuma drops sweet tin that from the book was only mentioned as the container for her ashes. But by recognizing the significance and preciousness of these particular sweets from that time of rationing, he develops the internal context of the character, so that the tin holds the memories of her playing with it and thus it becomes more than just a contain
er for her ashes but a container of her memory. The film is full of symbolism and signifiers of these childrens plig
ht. The fireflies is deeply significant - symbolic of the short life of the girl.

"Mature fireflies which emit light have extremely short life spans of two to three weeks and are traditionally regarded as a symbol of impermanence, which resonates
with much of classical Japanese tradition (as with cherry blossoms). Fireflies are also symbolic of the human soul (Hitodama), which is depicted as a floating, flickering fireball. Heikebotaru (平家蛍, Luciola lateralis),
a species of firefly that exist in the Western region of Japan, is so-called because people considered their lights, hovering near rivers and lakes, to be the souls of the Heike family, all of whose members perished in a famous historic naval engagement - the Battle of Dan-no-ura.)"* Wikipedia.org
The design of the characters establishes and maintains their purity and innocence in the
circumstance. The Anime style used maintains realistic proportions and movement and the colours used throughout are subdued. They move and play and react in realistic movements. The physical environment of their story unfolds in has a photo realism that sets the tone to be s
erious yet their characters maintain the lightness of a child's view.

As their progressive deterioration of health takes hold, from the affects of the bomb's fall out radiation, their appearances decline, the colours become more subdued. Their expressions take on the somberness of children who have lived through trauma. It is deeply moving to witness their lives, experience their small pleasures and feel their disappointment. The film keeps it personal and in the moment. It is a must see, but only in full dedication mode, not thinking you can watch it and do something else. Total absorption. It is one of the rates antiwar films ever made. Further reading on the Physicality of the Grave of the Fireflies from Bill Mousoulis

In a completely different but equally successful approach to difficult life topics, Harvie Krumpet by Adam Elliot id the Oscar winning story of a very unfortunate ordinary man. The story deals with many issues including refugees, loosing a testical, having a magnetic metal plate in his head, falling in love, infertility, adoption, Thalidamide, loosing one's spouse, death and euthanasia.
The character elicit our interest and sympathy as the ultimate underdog and his lot. His very ordinariness set up against seemingly insurmountable life situations makes his naïve simplicity a delight to watch - no-one can feel bad about their own life after meeting Harvie. Yet he is not morose and even deals with the onset of Alzheimer's with a playful acceptance. He is an extended metaphor for the principals and strength of family values and despite the lack of ambition and opportunity he has in his own way a good 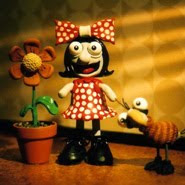 life.
Despite his traumas (including the banning of nudity in his nursing home) he remains hopeful, upbeat, even grateful for his change of mind from his own suicide (which in turn provided the means for euthanasia to his new found friend and her cancerous goiter). Harvie is a treat to watch, he is the ultimate antihero that helps us all feel that life is OK. I am looking forward to seeing Adam Elliot's latest piece Mary and Max.
Posted by Millie Young at 10:36 AM No comments: