This year saw the worst flooding in Thailand for at least 50 years. Unavoidably in it's path, my house too was flooded and I was displaced for 3 months. Initially I stayed home and commuted by boat, but on leaving the country for 10 days I returned to my 2 metre high stilted house inundated with a further meter of water inside, the first time this has ever happened in the 100 years of the house's history. The dramas, traumas, pain and laughter that unfolded were life changing, and as yet not over. I stayed at a friends for one night but was woken at 5 to the call of 'the dykes have broken, the water is coming'; I had to race to get off the fast filling island of Ayutthaya through over 5 miles of nearly metre deep fast flowing water. After three days I finally had the reassurance that all whom I had been forced to eave behind were safe... After 10 days my work was closed , the area I was in ordered to evacuate. I drove to Ban Phe and spent the next week in a state of perpetual news gathering and anxiety as the water continues to flow. I returned to Ayutthaya after a week to deliver 'care' packages to those who were unable to leave due to  work or responsibilities. The experience was surrreal. The river was swollen so high that even the swells were a metre high, my house now swimming over a metre deep was in an endless river; there seemed no end to it.
My cat joined me, on the encouragement of Yancey, after 3 weeks on her own with food visits every 2 days from Jo and Jong in a tiny two man boat. After a further week I had no choice and returned to Ayutthaya, to  two man tent with my partner, Fon and his family, they had been there for 2 months along with 70 elephants, cows, goats, buffalo and hundreds of people. They were suffering depression, anxiety and naturally, displacement. 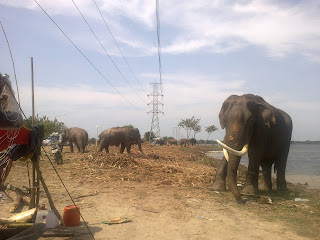 Five weeks later we all returned to our homes, those of us lucky enough to have houses that stood up to the onslaught. Many of my friends and families homes were damaged beyond recognition. There have been great losses, most significantly Diane, who could no longer stand the stress as all around her her family were breaking under the strain; arguing and fighting and loosing sight of hope, she made the most painful choice and left us all behind. The shock and pain of this has ironically brought her family, part of my extended family, back together. The funeral rites a mixture of Buddhism and animism had a cathartic effect. And involved fascinating ceremonial rites from the Kuay tradition. Now  gradually we are all piecing our lives together, relocating and salvaging what we can. Washing away the endless mud and finding a new normality. It's amazing what can become normal.

The experience has had a huge affect on my life and those around me. Some of which is irreversible. All of which has now become memory. I recorded the experience in photos, paintings, sketches and words at the time and I will be using these to piece together a narrative, with the help of those with whom I shared this experience. The collection of thoughts, memories and experience will I hope help salve some of our wounds. The story is personal, but the it reality is as global warming creates changes in the climate and environment never before seen that this or something like this could happen to anyone. One resounding truth came from this - water is the leveller, no one escapes.

This Abstract aims to explore the mechanisms employed in recording and collating stories from material gathered during the floods in Thailand 2011 and the processes used to create an animated documentary piece.

Oral History, and History itself, is merely a selective interpretation of factual events reproduced with a bias. Oral history is conventionally the domain of the poor, often illiterate and uneducated. Their personal experiences, which often are shaped by the factual historical events, are often not considered or attractive in the conventional Historical account.
Thailand’s annual monsoon floods in 2011 created an unprecedented disaster with an estimated 800 million cubic metres of flood-water displacing millions of people. The events unfolded over three months, yet the media focus only brought attention to it when the capital itself was inundated. The recorded history will no doubt focus on the mismanagement of the water flow through Bangkok, as well the political repercussions resulting from this.
I too was displaced and ended up camping in Ayutthaya with 70 elephants and mahouts and their families. Their personal experiences are both epic and exhausting, as well as inventive and enduring. A microcosm of the macro events.
Posted by Millie Young at 4:41 PM No comments: