Drawing A Motion on Death by Millie Young
“The young, the old, the dumb, the wise, death awaits them.”
Phya Anuman Rajadhon [1]
Animation means to breathe life into something, so the creation of animation to represent ‘Death’ is something of a challenge. I was invited to collaborate with performance artist Pattarasuda Anuman Rajadhon on the installation exhibition, ‘Dialogic’ 2(inspired by writings about Thai culture by her great grandfather3) at the Bangkok Arts and Culture Centre in July –Sept 2011.
Pattarasuda devised the setting and the context for the lotus maze installation and I had the task of creating the animation following her brief. As a guide to the creative concept I consciously employed narrative theories from Dr Paul Wells to help structure the four looped projections.
This abstract aims to explore the creative approach to the subject of ‘Death’ and the installation exhibition.
Areas that will be discussed:
·      Animation that is only ‘alive’ when in projection depicting ideas of death where no life (as we know it) exists
·      The relationship of the audience (as the only actual living thing in the gallery space that journeys through the maze) to the death on the screen
·      Narrative strategy theories employed include Metamorphosis, Symbolism and Condensation. However particular attention to the use of
o   Associative Relations – the juxtaposition of images familiar and unfamiliar in a setting that creates a new meaning and context
o   Choreography – the use of motion in a lyrical and poetic form of rhythm and pattern to create a meaningful expression
o   Penetration – The animating of a memory of something culturally and traditionally accepted but which is (as yet) unknown to us in life
The animations will be constructed as cyclical representing – ‘This is death and the end of the journey and the beginning’; and multi linear as there are four screens which will project simultaneously and continuously looping.
[1] Life and Ritual In Old Siam,Three Studies of Thai Life and Customs
TRANSLATED AND EDITED BY  WILLIAM J. GEDNEY 1961 HRAF PRESS NEW HAVEN
2   ‘Dialogic’ means the point at where the art of finding logics meet. It is the art of ‘the space between, in the middle’. And it is fluid, reflective and always changing. This exhibition is a playground for discussions and aims to fill the gaps between us.
The eight artists will base the exhibition/idea from the 8 basal behaviour as Phya Anuman Rajadhon has mapped out in his book of Tradition in thai Life and Customs: Birth, Age, Illness,Death, Eating Excretion, Mating and Sleeping
3 “We all have responsibilities in the past, the present and the future, continuously and coherently’ Phya Anuman Rajadhon

Phya Anuman Rajadhon occupies, or rather has created for himself, a position in the field of Thai letters and scholarship which is unique and paradoxical. Though he is not an academician by training, his scholarly attainments have placed on younger teachers and students at his feet and made him one of Thailand's most highly respected university professors. Though he is not a trained anthropologist, no one has made so great a contribution as he to the study of traditional Thai culture. Though he is not primarily a student of language and literature, no one can proceed very far in Thai philological or literary studies before he has to seek enlightenment from the contributions which Phya Anuman has made in these fields. Though he is not a product of Western education, hardly anyone has done more than he to introduce and popularize Western learning among the Thai. Though he is much more than a popular author, one could hardly find a professional writer in Thailand who can match the grace and wit of his prose style. Most astonishing of all, though he is not a Thai by ancestry, no student of Thai culture, history, liturature, and language, has displayed greater devotion to these fields.
The translator of any of Phya Anuman's prolific writings is faced with two conflicting aims. On the one hand, he wants to render the content as accurately as possible, since foreign readers are likely to be most interested in the factual material that he presents; on the other, he would like to preserve as much as possible of the delightful flavor of the author's prose style, which has all the vigor and pungency of the best conversational language. In the translations presented here it is to be feared that the latter desideratum has had to suffer at the expense of the former.
Thai terms are transcribed in the phonemic system devised by Professor Mary Haas as revised by her in Thai Reader (American Council of Learned Societies, Washington. D.C. 1954).
William Gedney, May 1961 Translator
Essays on Thai Folklore by Phya Anuman Rajadhon Publisher: Editions Duang Kamol
Death -  Pattarasuda Anuman Rajadhon
The young, the old, the dumb, the wise, death awaits them (from the book “Traditions on Death” by Phya Anuman Rajadhon {Bua’s Great Grandfather})
Theme
To convey the theme that humans and other living things have to die eventually.
To urge people to create and make the best of today. For tomorrow is not certain.
Methodology
The exhibition consists of a maze built of dried/dead lotus flowers. This maze stands for our life,  journey, a path surrounded by death.
*note* when the flower has withered totally, take it out of the stand and leave it on the ground. Take a new dried lotus and replace.
From the ceiling, hangs a bunch of fresh lotus, upside down, to let it dry. Flowers represent life. Therefore, lotus, stands for life and intellect which will soon be taken over by death.
The video/ animation is projected onto the right wall.
-caterpillar travels from the body and never return (cause of dying)
-dying as a journey
-animals which serve as vehicle of the dead
-living
Whatever exists, exists, and will always exist
The audience is the only living thing in this exhibition. The maze and the flowers are dead.  The video is actually one’s memory.
At the moment it is planned in a corridor like space with 1 m high maze created throughout from the lotus flowers and stems. (These could be substituted for lilies)
Here is a rough sketch 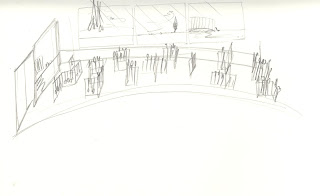 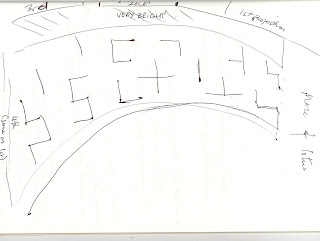 There are 3 projections next to each other along the right wall and a further projection (a repetition of the 1st) on the far exit wall/screen. 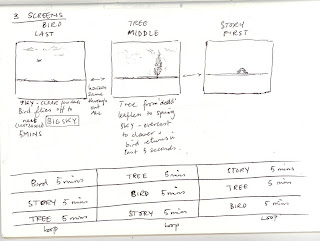 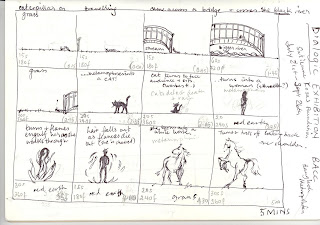 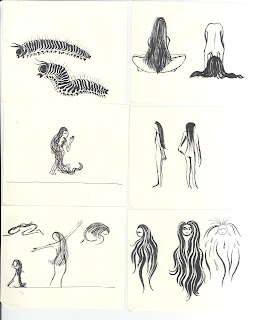 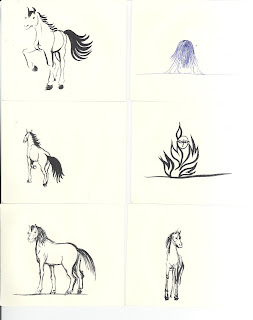 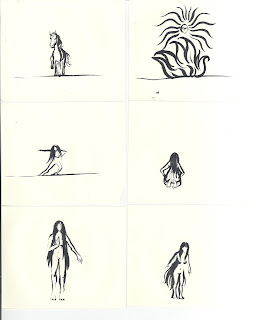 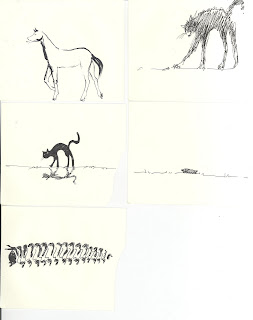 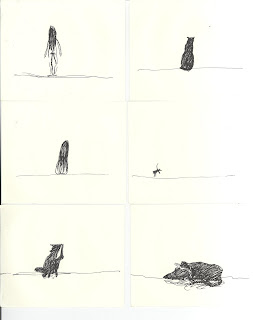