As part of the second annual Bangkok International Digital Content Festival http://www.bangkokdc.com/ from 27th -29th April 2015 there were workshops and seminars about Thialnd's Animation and Digital Content Industry. I was lucky enough to go along to Ed hooks' Acting for Animation Workshop at BACC on the 28th May with my Character Design and 2D Animation Production class. Ed Hooks is a most engaging speaker and passionate about the craft of animation and it's potential to create great narrative and story telling. 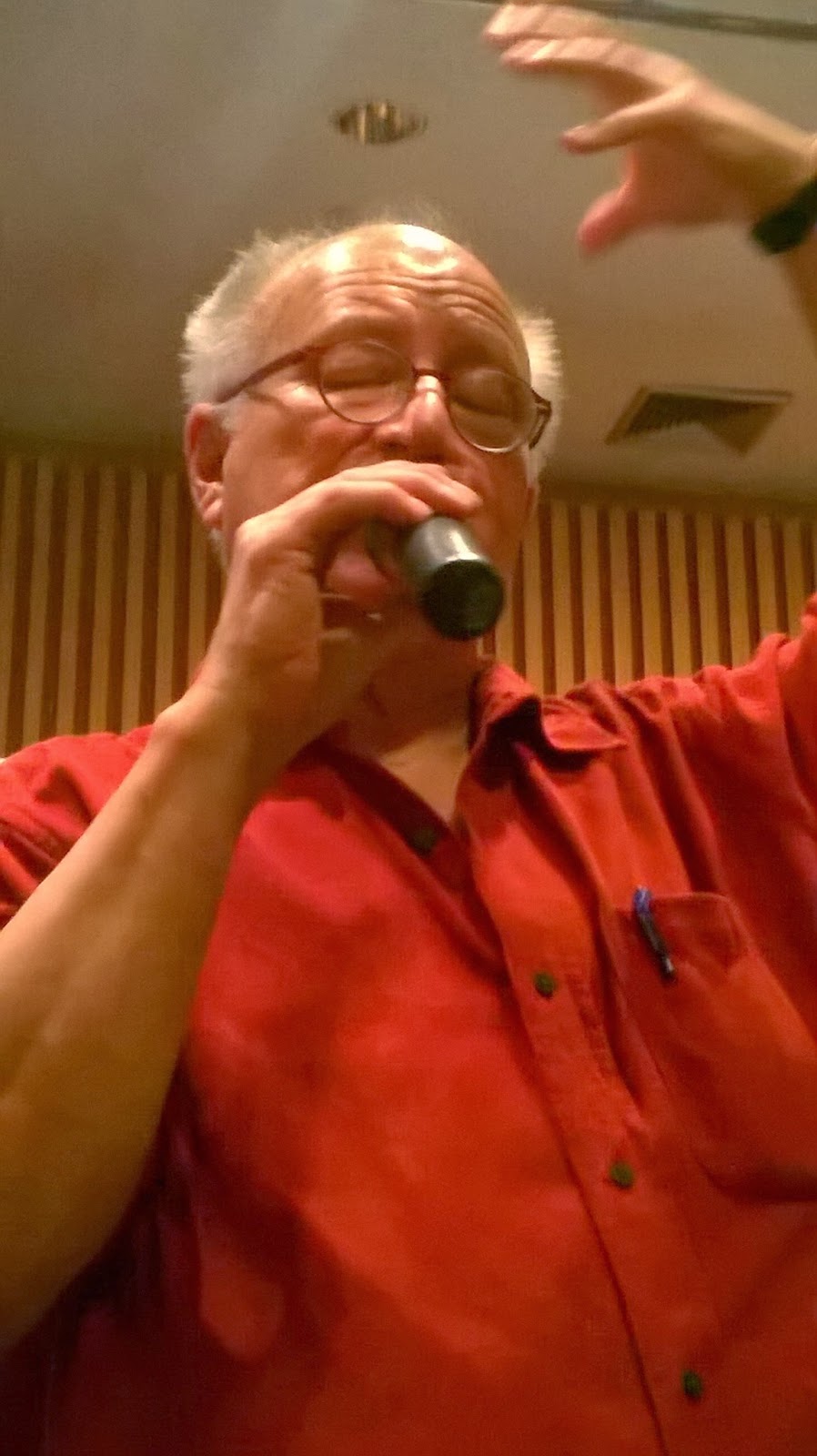 Theatrical reality is compressed. Time does not play out in real time and thus situations and events unfold often with  dramatic intensity. Each character within a story each has to play out their actions in order to reach their individual goal or objective.  But for the circumstances to be of interest to a potential audience there needs to be drama: for there to be drama there is a need for conflict. Ed identified three types of conflict: 1. Conflict with self; 2 Conflict with situation; 3 Conflict with other characters.
Once there is a conflict - then there is a story, the character needs to do something to get their goal(s) and to do this they need to overcome the obstacle. 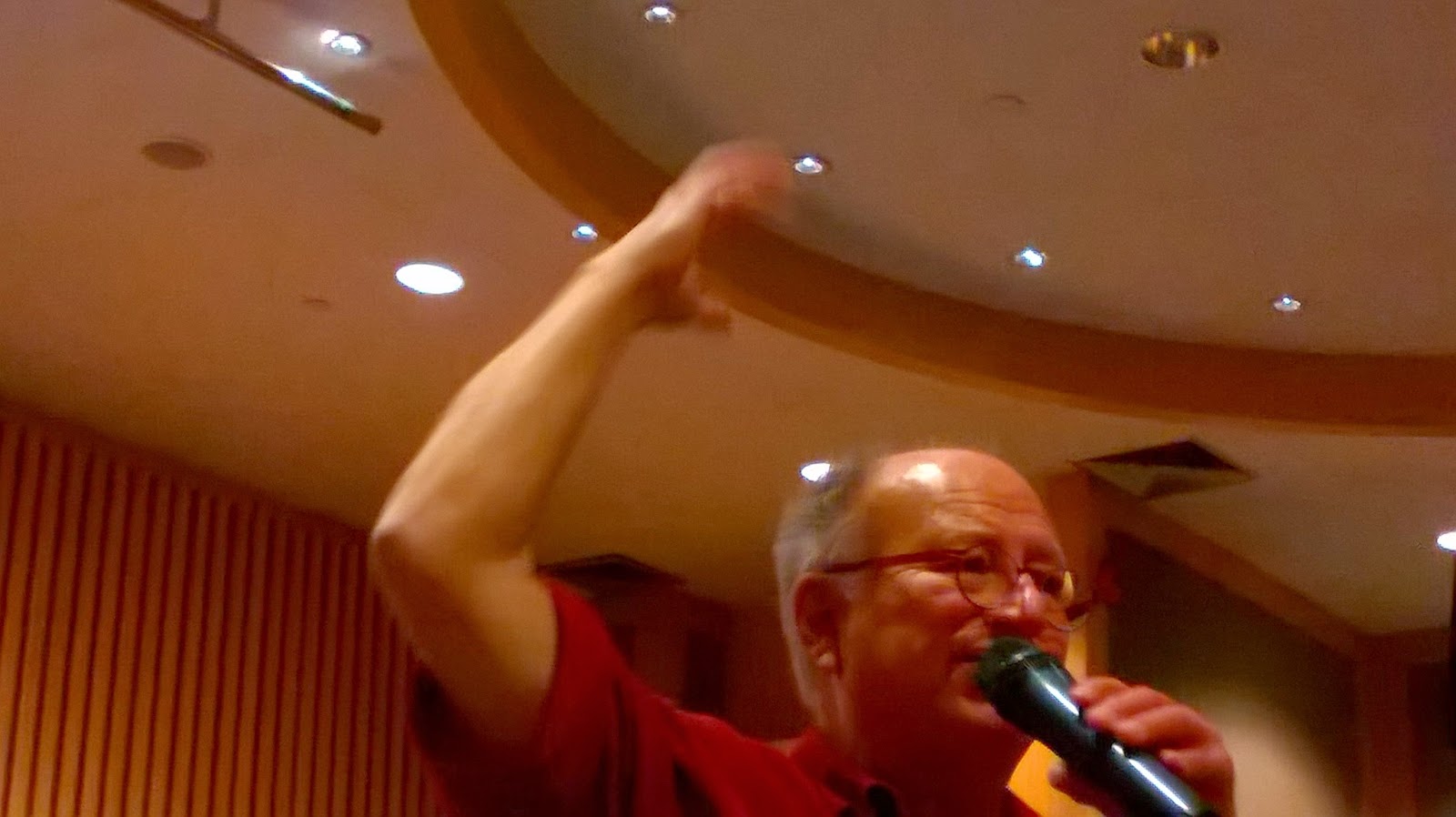 "Action in pursuit of an objective while overcoming an obstacle" 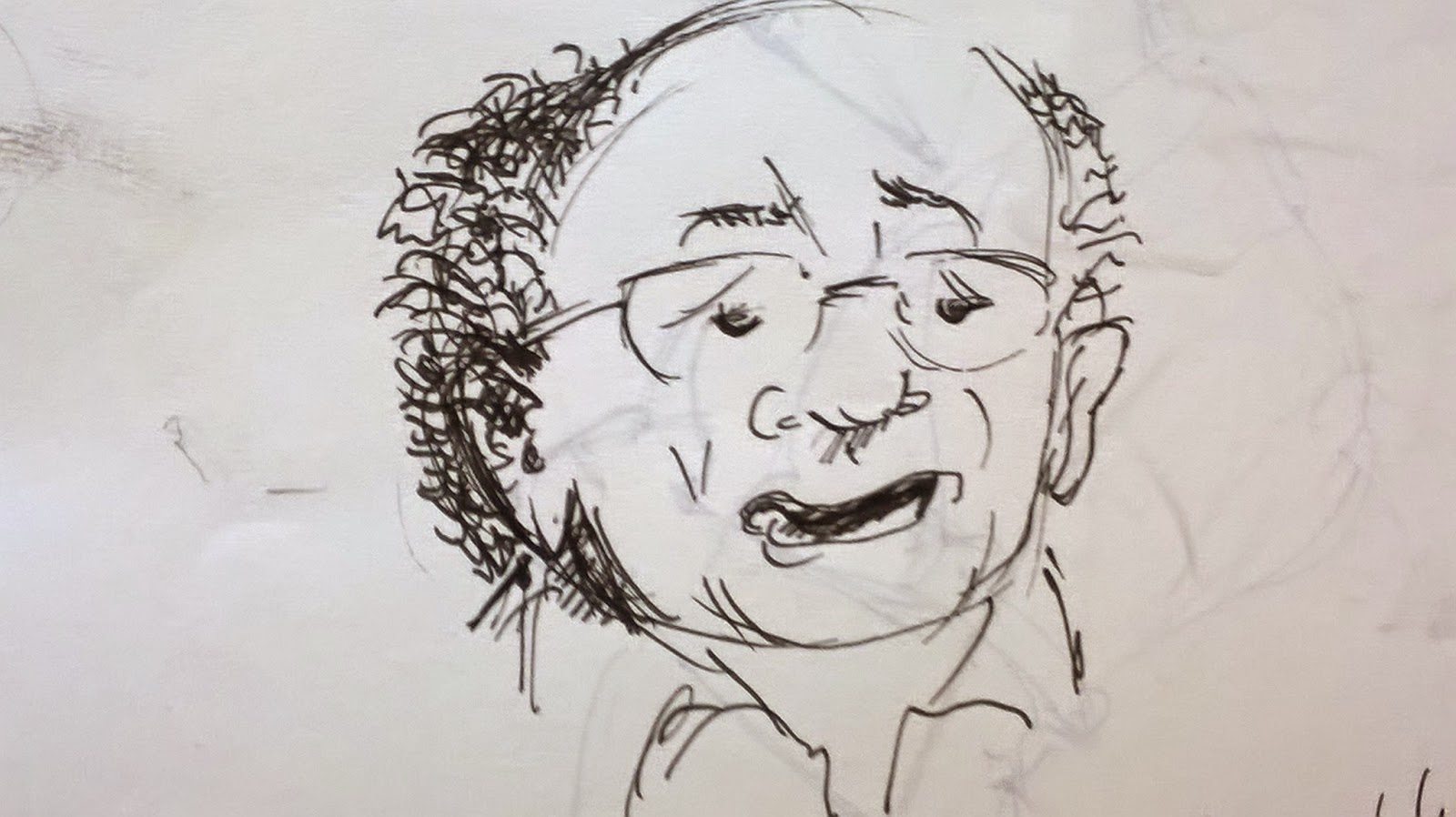 In theatrical acting, actors work in the present moment, their actions are part of action and reaction to the present circumstance and their skill is in performing believably to the character they are portraying. It has been argued that animators are actors with a pencil (or keyboard) but Ed argued that animators work in the fraction of the moment, in 24/25/29 frames per second, the actor in animation is the character, the animator is the puppet master/director/coach to the character's action. 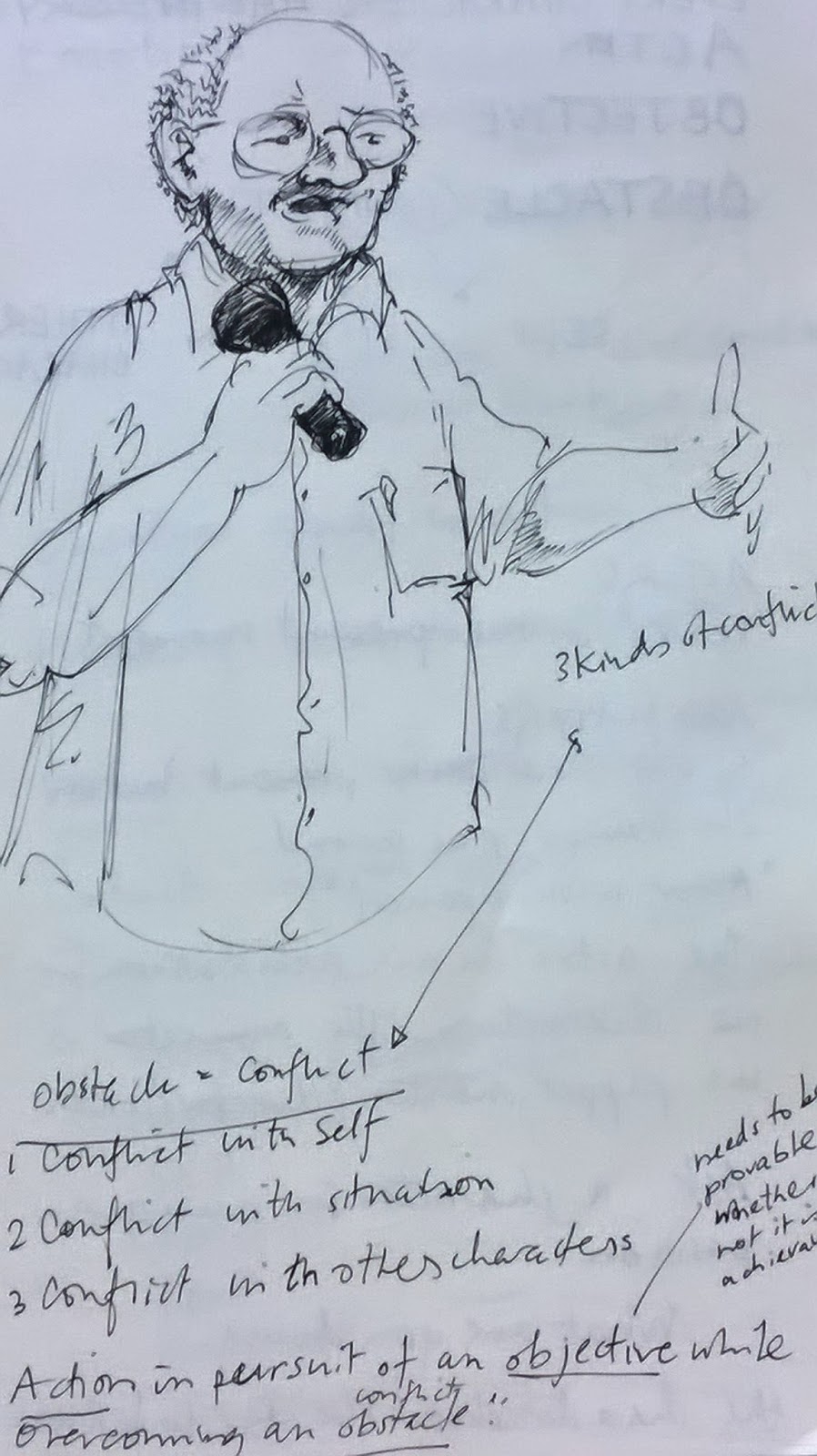 In being a puppet master the animator needs to engage with the emotion of the character. Emotion as defined as a reaction to a given situation/thought or other character. It is an automatic value response and impossible to have an emotion without thinking. Emotions lead us to actions. Thinking leads us to conclusions. Values are however different from person to person. Values are informed by experience, culture and personality. And these inform our thought and action. There are 7 basic emotions:
1. Anger
2. Happy

These two are the first emotions present in a baby. They are emotionally responsive to their world with either anger or happy. The other emotions are learned by experiences and by immitation of their parents and peers.
3. Sad
4. Fear
5. Surprise
6. Disgust
7. Contempt

Ed Hooks advocates the idea of empathy in story telling. The heritage of which goes back over 6000 years, probably more! Linked to the storytelling shamens of Mesopatania (Old Iran) who would unravel the values that helped to keep the tribes together. Also the historical account of Thespus in ancient Greece who stepped forward of the chorus to 'become' the god.

'When you tell a story you are helping to keep the tribe together, Story tellers are different from others - they see things others cannot see' Ed Hooks
Ed emphaised the need for the animators of today to recognise their role as the story tellers of the modern age, And the responsibility to understand why people do what they do so that their characters take on the roles to tell the story.
Empathy is crucial and the difference between empathy and sympathy need to be recognised:
Empathy - Feeling in tune with the emotion not thinking what it would be
Sympathy feeling (sorry) for the situation 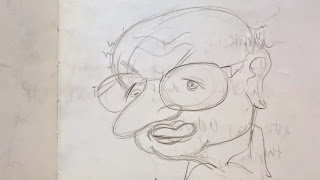 The key issues are the role of thinking which lead to conclusions and based on the conclusions you/the audience gets automatic value response (emotion) and based on that emotion you do something - an action.
This is fundamental in acting in animation because it is not the words that are spoken that show what the character is thinking, it is the actions.
The example he gave was from the facial acting of Gollum in Lord of the Rings. (https://www.youtube.com/watch?v=sEyFvGXnD7g)  The lead animator was Bay Raitt (http://www.extremetech.com/gaming/55934-the-making-of-gollum) where the animator split the script and added the thoughts into the action thus as well as the video reference and (limited) motion capture he was able to make the character and Andy Selkis acting face really become as one. You can read more about this here:
( http://www.cgw.com/Publications/CGW/2013/Volume-36-Issue-2-Jan-Feb-2013-/Of-Gollum-and-Wargs-and-Goblins-Oh-My-.aspx)
and here: (http://www.awn.com/animationworld/two-towers-face-face-gollum)
Ed Hooks went on to talk about and analyse the earliest storyboarded sequence in teh Disney's repetoire Playful Pluto. Where just the sequence involving the flypaper sticking on Pluto is story boarded. The sequence clearly stands out from the slapstick randomness of the rest of the film as we 'see' the thought sequence of Pluto. the storyboard demonstrates the ACTION OBJECTIVE and OBSTACLE motivation of the character as he gets more and more stuck - each time the obstacle is overcome a new one arrives setting off the next action Objective obstacle. The key to clean clear animation is to keep each action (and it's intents) separated.

The next example he gave a breakdown of the scene Clip from Pixar / Disney's Toy Story (1995), in which Sid learns first hand what happens when you don't take good care of your toys. It demonstrates the ida clearly that at any given point you can freeze frame and ask, 'What are you doing?" of any character in the scene and the Action/Objective and Obstacle are all clear.


One of the conclusions presented by this theory is that drama is about man's potential (to overcome obstacles) and comedy is about man's limitations or failings to overcome.
He then illustrated this with a (damning) critique of the gag driven opening to the Croods which relies on an overload of gag driven actions that are playing for laughs (at someone) rather than developing character and empathy. I tend to agree that this lacks depth but for gag driven humour it's fast.


Playing for laughs has it's uses for stimulating a quick laugh and perhaps focusing the attention of the sugar filled cinema audiences into sitting down for the film. But in terms of real attachment to character and story it leaves a blank. I'm kind of in the same place as Ed on this that with such huge budgets needed for these films it seems a shame not to invest in the potential for film to be viewed and viewed repeatedly because of it's storytelling powers to teach us about life, obstacles, emotion and failings. 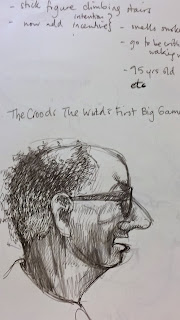 More of Ed's in depth analysis for the 2015 Oscar nominees can be found in Cartoon Brew:
http://www.cartoonbrew.com/ideas-commentary/oscar-ballot-guide-big-hero-6-acting-and-performance-analysis-109226.html


On an aside he went into details based on ideas he has gleaned from Educational Psychology Survival Studies. (recommended reading Roger Shank: Tell Me  A Story: Narrative and INterllegence" https://books.google.co.th/books/about/Tell_Me_a_Story.html?id=3fah9UGzVJ8C&redir_esc=y
An area of study Ed advocates for it's usefulness to character development and acting in animation.

He then made some very useful points about the acting role of BLINKS!
And key to understanding how to animate conversation we have to recognise that LISTENING is all about thinking what you are going ton TELL next  - your addition to the STORY being TOLD, or your DEVIATION from the other person's STORY
To help with this animators can use the EYEBROWS which tend to respond involuntarily and thus 'give away' the TRUTH of a character. We (humans) TRUST eyebrow communication. 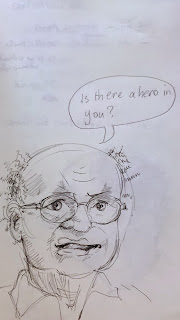 The Hero he argues is a regular person who overcomes an extraordinary obstacle to achieve their goal. And that makes a good story! The story hero is the one who has the character arc, through whom the story is told. They change throughout the narrative and we, the audience learn from their journey. All other character's are supporting.
The villain however is often determined by the target audience - how old they are. The younger the audience the more stereotypical the character tends to be. 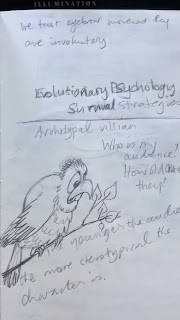 To make a story work well Ed advised:
As an example of cleverly devised storytelling that gets a strong point over  he screened Sharon Coleman's Oscar nominated (student) film BADGERED

Having met Sharon at Newport University when the idea was first thought up, he went on to meet her again at the National Film And Television School where the film was completed and sent to festivals and finally nominated for an Oscar! The film is essentially about Sharon's passion regarding the nuclear missile deployment in Scotland which by the by was disturbing the habitat of the local badger population. The story however is told using the objective that the Badger was trying to get to sleep, but the crows were stopping him. This simpler pretext allows for the greater picture (nuclear missiles being accidently set off) to be seen through the innocent occupation of the Badger trying to reach his goal of sleep. The humour is gentler (than say the Croods) but powerful in it's context. We sympathise with the universal need for sleep, thus we empathise directly to the Badger's situation.

Samuel Taylor Coleridge famously coined the notion of 'the willing suspension of disbelief' and Ed Hook's referred to it as a guide for the animator to drive the character's narrative.  In order for the audience to empathise there needs to be a degree of distance. In animation in particular the level of disbelief needs to be established so that the characters operate within an agreed boundary. The audience is not a lurker, a voyeur to the proceedings, they must participate in the magic to empathise. They know it is pretend,  a story but they need to suspend their disbelief so they can FEEL the emotions.
In the Opening of any film you must establish the laws of physics , the boundaries for the character's world.  One of the dangers with the present large studios productions is that they often start production without a full script or story. For example 'Up" went in to production with the story set up to the point where the house lifts up. Arguably up to the that point the ideas and narrative are directed to an adult audience. The world they live in has arguably the same laws of physics as our world. Thereafter the laws of physics change and dogs start to talk and fantasy takes over and the appeal is directed more to a children's story. The focus of what the characters want is changed.

A good story should be able to be summarised in 5 sentences. And within the story should be the adrenalin moment, the place where the hero changes. In evolutionary terms this is the key moment for our survival. The moment when our brain triggers the production of adrenalin. the moment of fight or flight, where your VALUES change. As storytellers this is the key moment to tell the audience what to do. To make a memorable story you need a memorable moment.
These moments that turn a charatcer life, that change their path, their thoughts and therefore their actions.


All these unforgettable moments, some may be big, others small but pivotal in the change of path. These moments need to be made clear. With Japanese films, particularly Miyazaki's works, there is a strong understanding of the Ma (the negative space inbetween - for instance the gap between the clap sounds This gap should be filled with intention and purpose. The pauses should mean something.
Acting, and acting in animation, storytelling are a process of exposing the TRUTH, The UNIVERSAL TRUTH to the audience.

A big thanks to Ed Hooks for a great Talk.