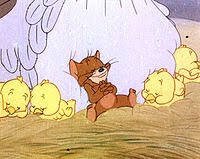 So today I was introducing character design to second year degree students. I took the liberty of indulging both them and myself in some classic animations.

Tom and Jerry in "Fine Feathered Friend's" directed by William Hannah and Joseph Barbera in 1942.

This follows the cat and mouse in a classic, non verbal, chase and rivalry scenario... with the addition of the mother hen character. A fine figure of a chicken whose warmth and maternal protection is 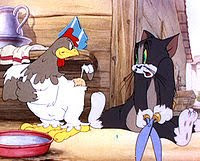 used by Jerry to gain the upper hand. Jerry outwits Tom in all his attempts to capture him. However, Jerry isn't always so smart and can be seen loosing concentration and following a line of ducks down to the pond as the Busby Berkely style moment of Duck/Chick line up bypassing each other.
Tom however gets a hard time throughout, his attempts to outwit the chick and mouse ending up in inevitable violent retribution metered out by the menacing and one might reckon quite masculine mother hen. 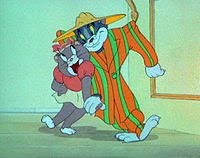 William Hannah and Joseph Barbera in 1944.
The two adversaries are given dialogue. They are seen to be parodying the smooth talking, actions and styles of the Zoot suited Afro-American, Puerto Rican, Mexican American and Italian scene of the 1930's.
Tom is seen in the beginning in what could suggest a fumbling romantic but the stereotype veers toward an archetype of the black southern country boy favored by many Hollywood studios at the time.
In failing to win his girl overhears a radio announcement on how to be 'hip' and get your girl, just get into a Zoot suit.

From here on Tom and Jerry become love rivals in their quest to win the dance/ heart of the cool cat gal - zoot suited up (complete with coat hanger shoulders) and putting on the charm they vie for her hand on the dance floor.
It is quite a leap of faith/ suspension of belief being thrown at the audience that they are both after the kitten's love interest and a far cry from the earlier straight cat and mouse scenario seen in 'Feathered Friends' and all played along with the sometines heavy handed jibes that parody the Afro-American, Puerto Rican, Mexican American and Italian culture of the time. It's hard to tell if these are homage to the dance clubs and the natty dressing cats or a veiled dig at them.
But then in 1944 there was far stronger propaganda being played out in the cartoon world... which I will save for another day...