In teaching this second year class I spend the first two weeks filling the students with information and inspiration in order to dispel any preconceived ideas that may be lacking in true thought and personality. A case of not just drawing on what you know but what you can add to what you know not just what you think you know, if you know what I mean!
Key to all good characters is of course STORY! The mantra of PIXAR studios. I was lucky enough to go to one of their Masterclass workshop's with Matthew Luhn and Andrew Gordon in Melbourne at Deakin University and co-hosted by Van Arts, from Vancouver, Canada this year, and was filled with a brimful of inspiration.
So to start the students on their mission I got them to use Matthew Luhn's story spline to help them analyse their favourite animation character and explain their story.

The story spline works really well to also decode and analyse the resulting characters within their narratives, which can continuously be used to develop and check a story is working in it's creative process.

It soon became clear to the students without my press ganging the idea, that their choices reflected similar universal themes that related to them and their age group. Themes of breaking away from parents/family, loneliness/insecurity and individuality/rebellion.
Fairly typical themes that the students here connect with.
Then I ask them to do a quick sketch of the character and asked:
Depending on the characters chosen and the individual's skills this was relatively successful in getting them to see for themselves what makes the characters they relate to stand out and the problems they will need to resolve in their own design.

Continuing with the analysis using more prompts from the Matt Luhn workshop, they were asked to explore the five key elements that go to make up a character:
1.FEARS: Fears from past experience that are still present to this day  eg illness/heights/strangers
2.STRENGTHS: Not talents – but character traits… eg leadership/positive attitude/calm/humanitarian/stamina
3.FLAWS: Things said behind your back /character weaknesses… eg drinks too much/gambles/lazy/stubborn/angers easily/rebellious
4.DARK SIDE: Worst character trait/ lowest low….  eg gives up too easily/ blames others/will kill to win/lies/cheats
5.Traits they admire in others: Not talents but character traits…  eg leadership/positive attitude/calm/humanitarian/stamina
http://matthewluhn.com/books.htm

inner conflict and outer conflict
The crux of the story should be the characters inner conflicts not the outer (circumstantial) conflicts.
There is no story if there is no conflict. Characters need to be willing to put up a fight (metaphorical or actual) for their convictions (beliefs /desires) . They need (internal or actual) strength, stamina and a will to see the story (what ever has caused the conflict/change in circumstance) to it’s logical conclusion.

So with guidance in hand they set off to design their characters and create a bible consisting of :
background research and development
log line and synopsis
model sheet
how to draw
colour chart
facial attitude
gestures

So after a few weeks here are a few examples of the students character designs: 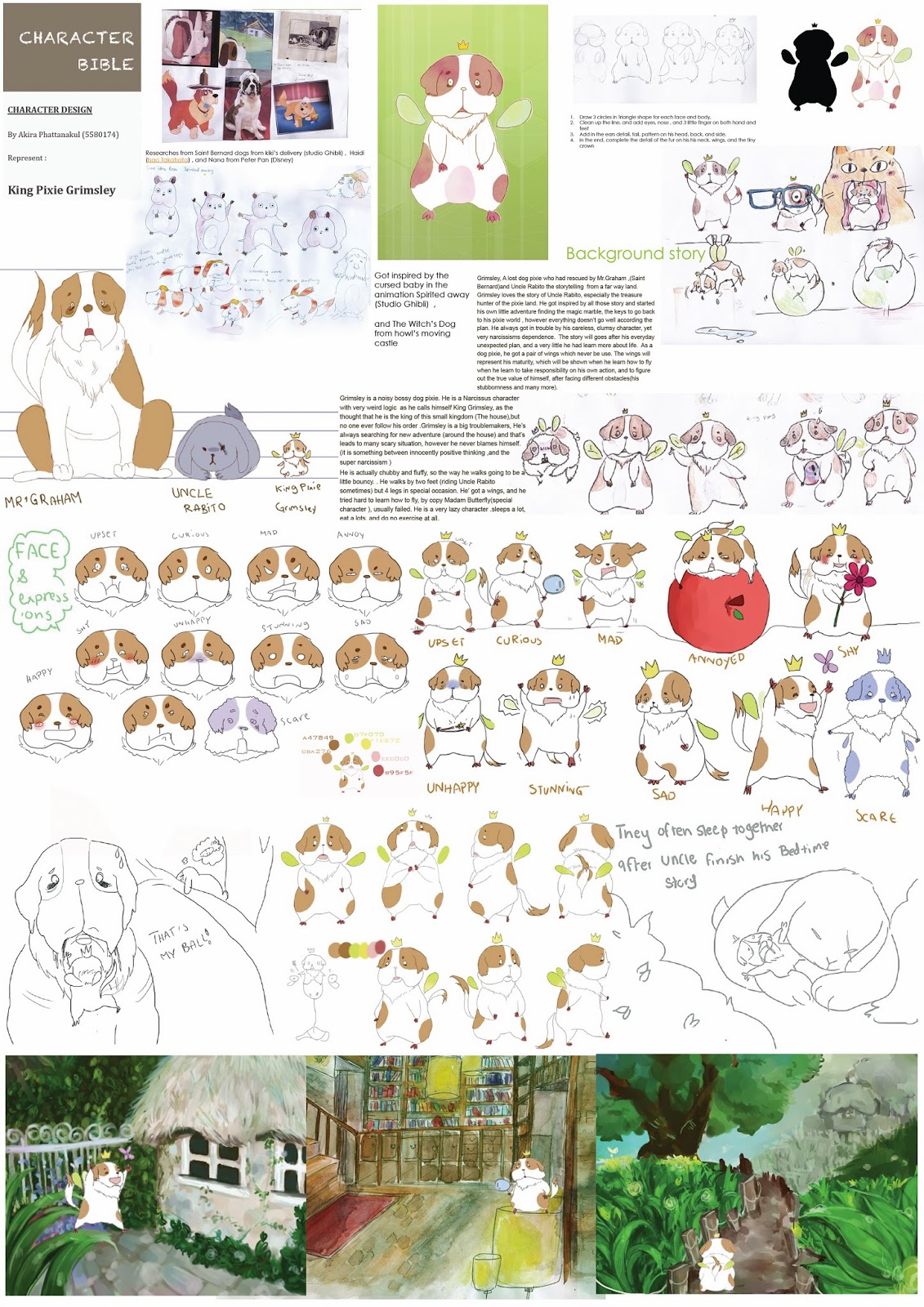 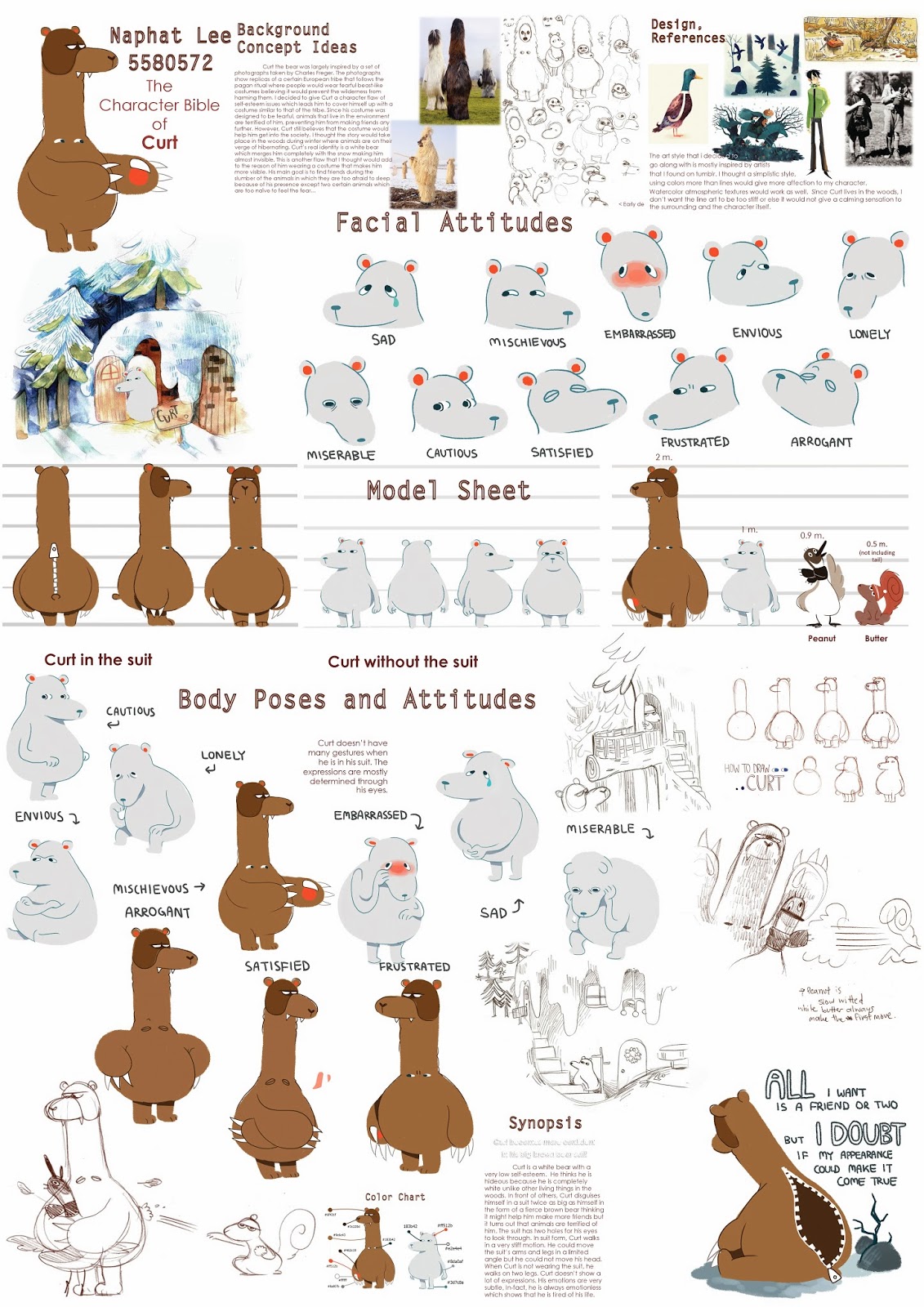 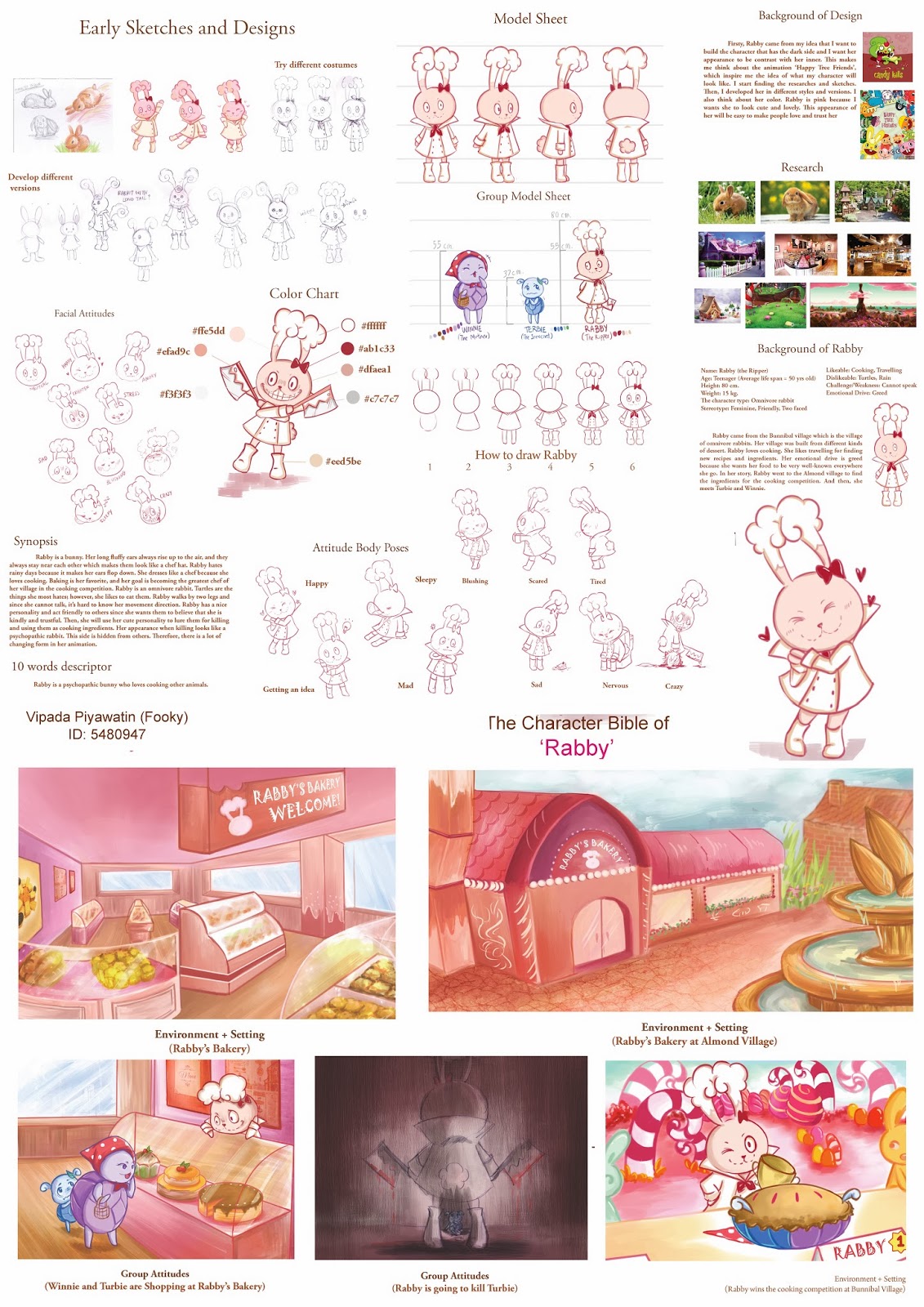 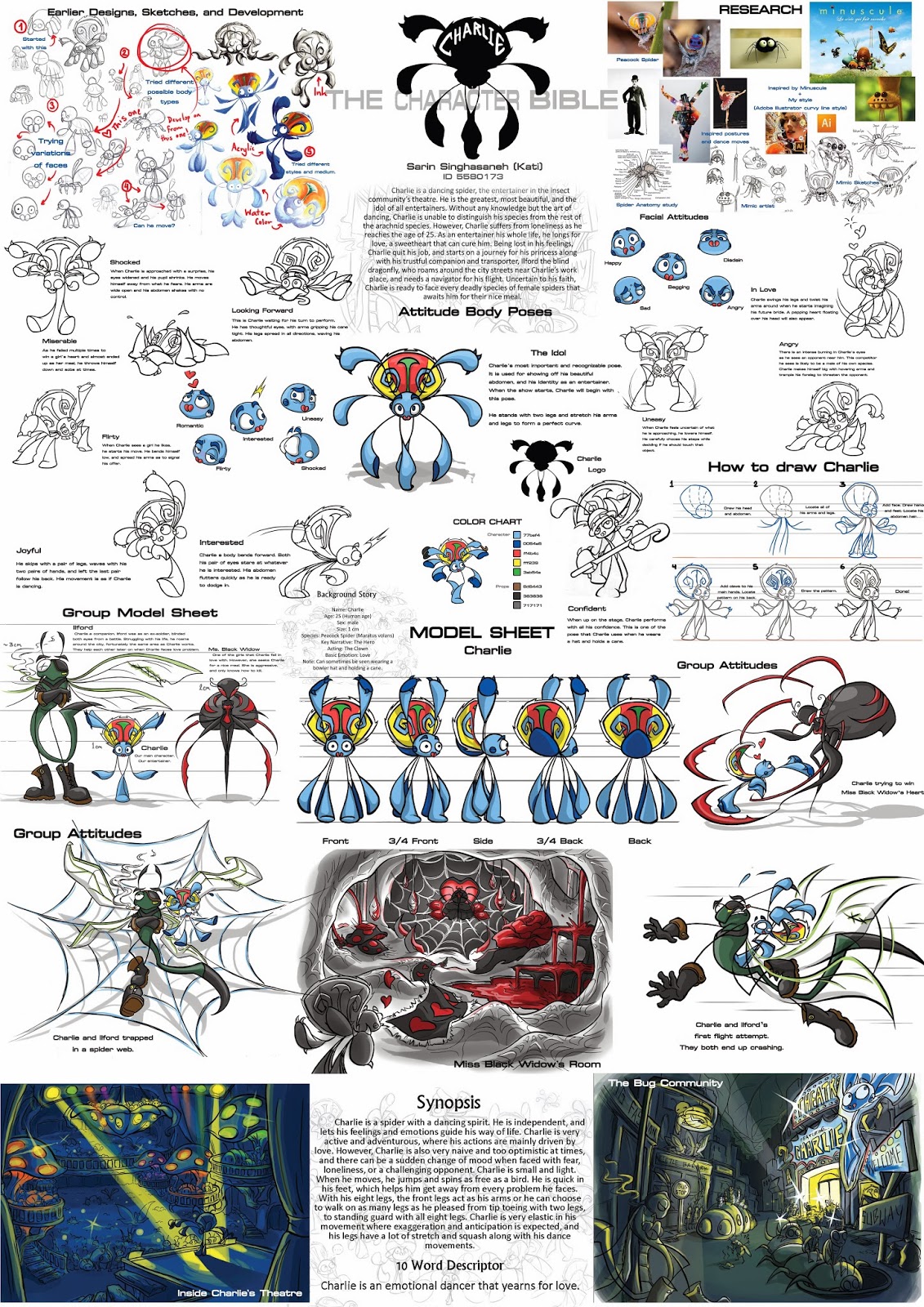 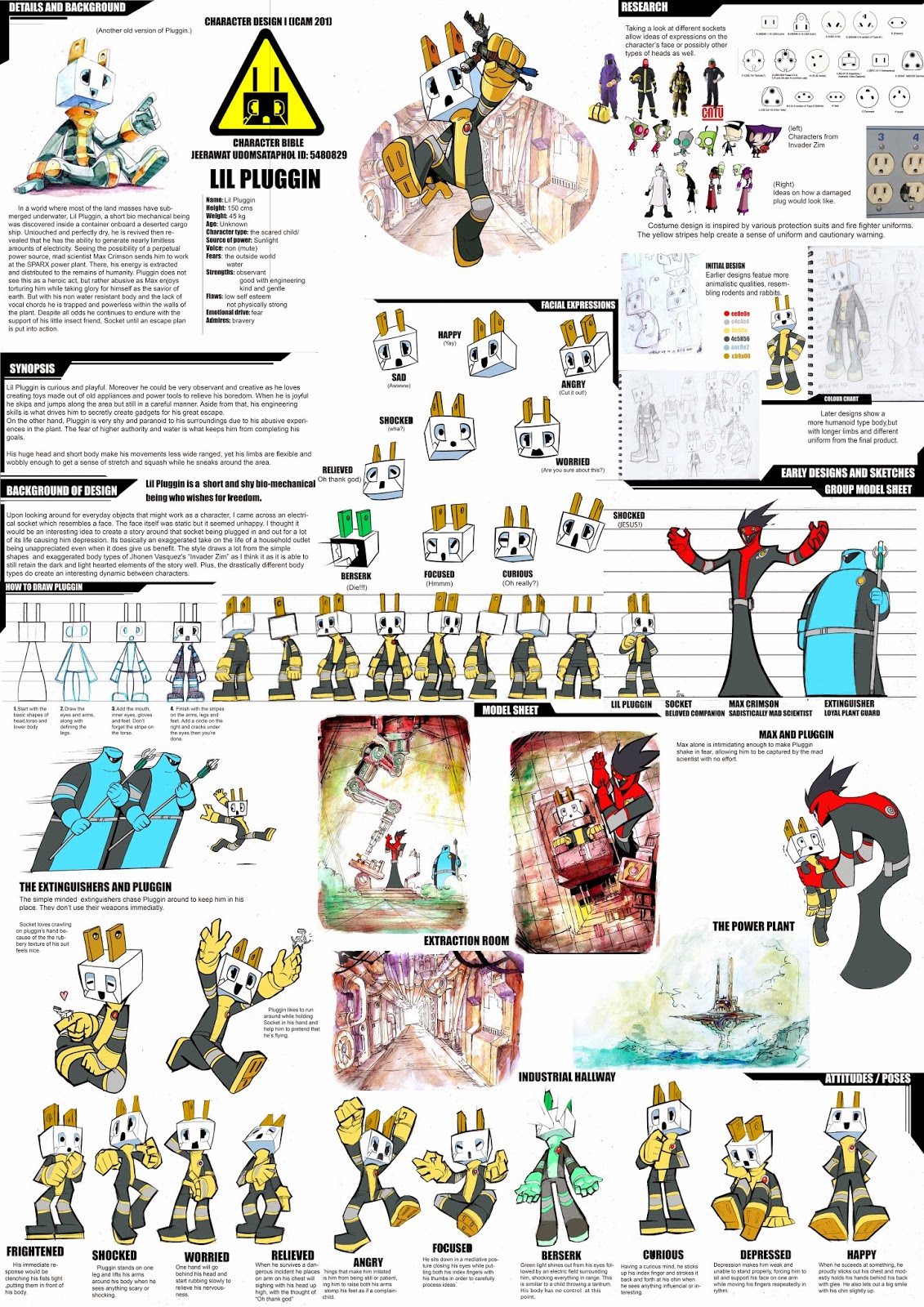