At Mahidol University International College in the Fine Applied Arts Department I teach on the Animation Program. The curriculum is designed to develop students in the history, analysis and fundamentals in animation; pre-production design and concept work through Storyboarding and Layout Design to 2D Animations traditional hand drawn, digital, Photoshop + Aftereffects and 3D Animation using Maya. Our emphasis is on story telling and narrative  leading to  the final senior project where they can utilize all that they have learned into a short animation production.

This term one of the courses I am teaching is Character Design 1. This is a second year course and their first time to apply the design and animation principles into a character. The aim is to develop a design for a character into a fixed design 'bible'. Then to do some test animation to model, and to make a maquette in clay to explore the transition of design from 2 to 3D.

Alongside teaching the course I will be designing and developing characters that were inspired during a workshop with John Andrews, producer of 'Beavis and Butthead' amongst other claims to fame at the Thai US Creative Partnership Seminar and Workshop in Bangkok in August. 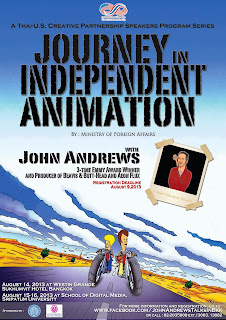 The Seminar was very informative and the follow up workshop at the co-host Sripathum University. 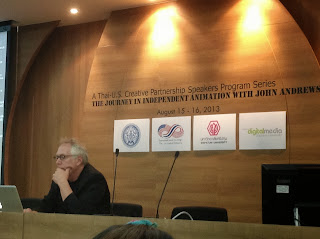 John gave great insights into the character design process in relation to student theiss work with additional ideas related to the commercial television series. Here is a summary:
Some key points and advise that John gave about pitching projects:
Comedic Gags: the basis of most gags is based around:
Ask:
Ideas for TV Series you need to also ask:
eg.
ALSO
What are the rules of the show?
eg.
Visual style:
eg
What is the tone of the series?
What does it SOUND like? The voices? The ambience?
Know your story and know your background/ back story
Prepare possible compromise - sometimes you cannot sell the fuller pitch whole idea/story/series
eg 1/2 hour series of full cast has to become a 2 minute set piece within a larger program. So even if whole story isn't shown the details inform the story when  it is shortened. So KNOW the detail don't always TELL. The details inform the action, reaction and settings.


Target Audience (Understand TV networks):
Outlets for selling TV series (US) Each channel has their own ID, these identities are commercial driven and develop and evolve over time as different series are commissioned.
* Adult cartoons eg Simpsons, Family Guy, King of the Hill, South Park
These use Human stereotypes and tell about the Universal themes/ universal conditions/ universla politics. the characters reveal human foibles and failings. the story angles reflect and develop with ideology and universal themes prevalent in the society.

Then as  as part of the workshop day we were invited to do an exercise to come up with some designs ourselves: 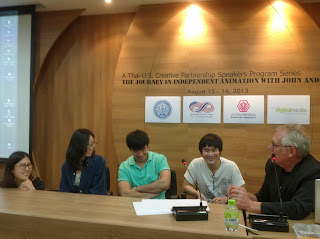 Here are some of my students, Gib, her friend, Ben and Dodo explaining their characters to John. 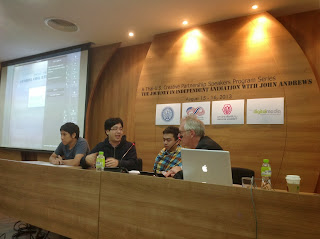 Here two students (I think from Sripathum University) are explaining their characters with the help of Bird (alumini from FAA) helping with translating.
My designs were based on my dogs Dikdika dn Lil Mo whom I had left that morning in their customary security positions like this... 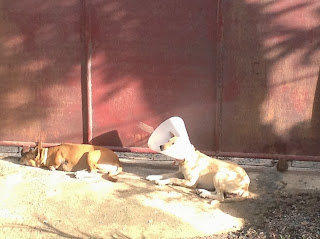 As you can see, Lil' Mo is sporting a 'cone of shame' at this time... however he believes it to be a 'cone of power'!
Here are my initial designs: 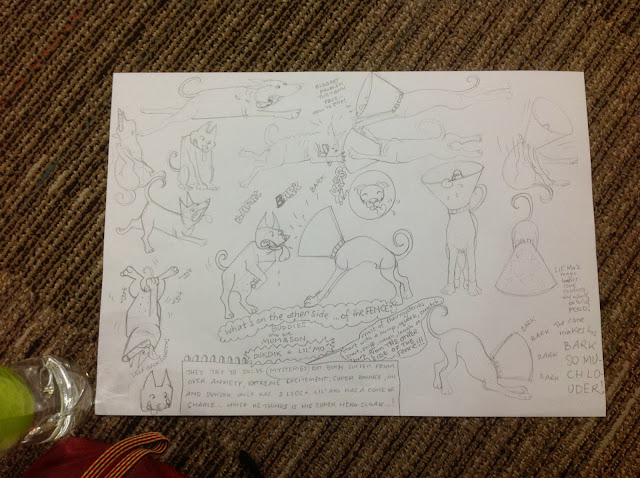 This is the start of their story. 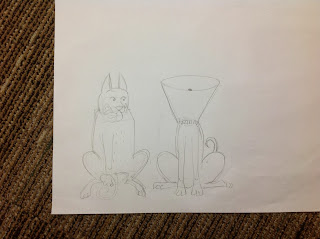